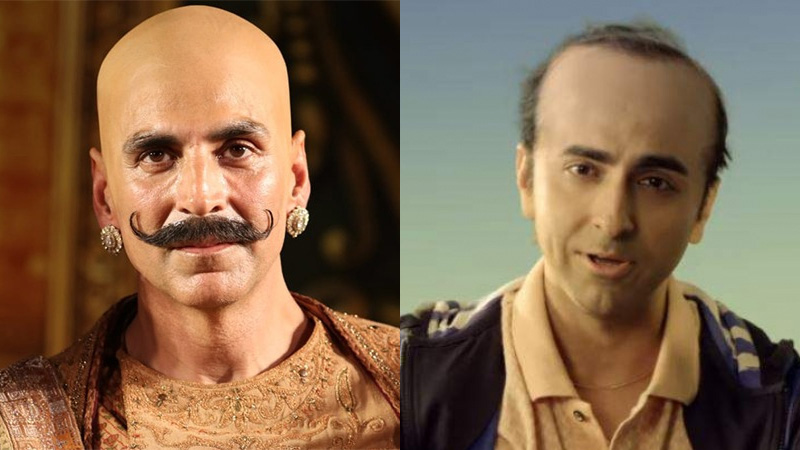 Love has been pouring in for Ayushmann Khurrana from all corners for his latest release Bala, in which he plays a man with a receding hairline. Be it the audience, critics or celebrities, everybody is lauding Ayushmann for his performance in the Amar Kaushik directorial. Recently, the other Bala of Bollywood – Akshay Kumar, went to watch the Ayushmann starrer and had only wonderful things to say about the film and its star cast.

Before leaving for the show, Akshay took to Twitter and wrote that he is heading to watch the newest Bala.

Ayushmann was quick to give out a reply and hailed Akshay as the “real king Bala”.

After watching the film, Akshay was so impressed that he proudly passed on the Bala crown to Ayushmann, who was touched by the beautiful gesture.

Akshay also played a character named Bala in his Diwali release Housefull 4 and vowed the audience with his comic timing. He even took over the Internet as the #BalaChallenge went viral on various social media platforms with people trying their hands at the hook stop of Shaitan Ka Saala song. The film has done a humongous business at the box office so far and is currently eyeing the Rs. 200 crore club.

Ayushmann on a roll

Coming back to Ayushmann’s Bala, it is also scoring big numbers at the ticket windows. Co-starring Bhumi Pednekar and Yami Gautam, the film had an excellent opening weekend and is now set to be Ayushmann’s 7th success in a row.

It will also be a 2nd consecutive hit for Amar, who made his directorial debut with Stree last year. The Rajkummar Rao and Shraddha Kapoor starrer was a superhit and also entered the Rs. 100 crore club. And now, looking at the pace at which Bala is going, Amar is certain to score his 2nd century with his 2nd film. He is definitely a filmmaker to watch out for!